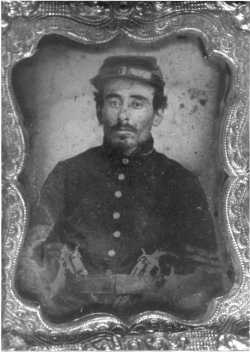 John M. Ausbrook was born and died in Clay County, Illinois. The son of Thomas and Alcy Ann (Apperson) Ausbrook, he was born to these early settlers in this county. He was born on 17 September 1840 and died on 15 November 1913. Except for his three years of military service, he was a life long resident of Clay County.

His father served as a Corporal in Captain L.D. Ewing's Company (later Captain Samuel Houston's) during The Black Hawk War. Known as the Spy Battalion of the 3rd Brigade of Illinois Mounted Volunteers, the Company was called into the service of the United States at the request of General Henry Atkison and by the Governor of Illinois' proclamation of 15 May 1832. Subsequent to his military service, Thomas relocated from his home in Fayette County, Illinois to Clay County where he settled on land which he was to farm for many years. In February, 1834 he and Alcy Ann Apperson were married in Clay County. Alcy Ann came to Clay County from Virginia with her parents Richard and Margaret Apperson and several siblings.

When the civil unrest between the states arose, John M. Ausbrook responded as a volunteer in supporting the State of Illinois and the U.S. Federal Government. On 3 September 1862, at Camp Centralia, Illinois, he was 'mustered in' to Company 'A', 98th Illinois Infantry (Volunteers) by Captain Washington. He became a Sergeant in this Company, a position he held throughout his Civil War service. He was 'mustered out' of service on 27 June 1865 at Nashville, Tennessee by Captain Hosea.

The 98th Illinois Infantry along with the 123rd Illinois, the 17th and 72nd Indiana and the 18th Indiana Battery of Light Artillery comprised the Brigade commanded by Colonel John T. Wilder. This Brigade later became known as "Wilder's Lightning Brigade". It was heavily involved in major actions in Kentucky, Tennessee, Mississippi, Georgia and Alabama from late in 1862 through the war's end in 1865. Their heroic performance at the Battle of Chickamauga was the only bright spot among an otherwise disasterous campaign by other Union forces.

According to the Daily Clay County Advocate Press edition of Friday, February 7, 1997: Wilder's Brigade was one of the most colorful units in the Civil War. Commanded by Colonel John T. Wilder, an iron foundry owner and entrepreneur from Indiana, the unit participated in 214 battles in the war. Not once did it leave the field in defeat.

One major reason was the fact the unit was armed with the Spencer repeating rifle, which gave the unit devastating firepower at a time when most used black powder single shot muskets.

When John M. Ausbrook was discharged from the Union forces on 6 July 1865, he was given a discharge certificate which contains insightful information about his service, his physical stature and occupation. It reads:

TO ALL WHOM IT MAY CONCERN

Know ye, That John M. Ausbrook, a Sergeant of Captain A.W. Stanford's Company (A) 98th Regiment of Illinois Infantry volunteers who was enrolled on the fifth day of August, one thousand eight hundred and sixty-two to serve Three years or during the war, is hereby DISCHARGED from the service of the United States, this sixth day of July, 1865 at Springfield, Illinois by reason of the U.S. Gov't. not requiring further service. (No objection to his being reenlisted is known to exist.)

Given at Nashville, Tenn this twenty-seventh day of June1865.

After his discharge John M. Ausbrook continued to stay active with members of the 98th Infantry as he was involved for the remainder of his life in Wilder Brigade reunions as well as being a sustaining member of the Clay City (Illinois) Chapter of the Grand Army of the Republic (G.A.R.). He was active in community affairs as he served multiple terms as a Trustee for the Clay City town government as well as serving as the Town Clerk. On 11 September 1866 he married Matilda Jane (Tildie) Ricketts in Clay City. This union produced three sons, Edward K., William G., and Clyde E. and a daughter Cora Belle. In their later years John and Matilda adopted Margaret Marie (Maggie) and raised her as their own child.

John died 15 November 1913 at Clay City while Matilda passed away on 26 March 1918 also in Clay City. Both are buried at the former I.O.O.F. Cemetery, now known as the Clay City Cemetery, Clay City, Illinois.