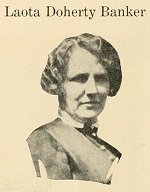 The subject of this sketch is a daughter of the late Stephen S. Doherty, who with a brother, Anthony Doherty, served Clay City and community as druggists from 1880 to the time of the former's death in 1926, excepting about three years from 1905 to 1908.

Mrs. Banker was born July 9, 1891, in Clay City and at the age of seven moved from here with her parents and after a year or so located in Murphysboro, Illinois, where she graduated in the Murphysboro high school in the year 1909. Her mother died while residing at Murphysboro and in 1918 she and her father returned to Clay City where he again entered the drug business and she assisted him as an apprentice.

At her father's death in February, 1926, she became the owner of the Doherty Drug Store and took up the study of pharmacy, passing the state board of examiners in January, 1929, and was granted a certificate and licensed a registered pharmacist.

To appreciate a comfortable rocker is to find it in another's home. If, in any other town, as large or twice the size of Clay City could be found a drug store that would compare with our drug store in Clay City, it should be worthy of special note.

For almost fifty years, with the exception of those mentioned above, this drug store has been owned by the Doherty family and today it retains the name, "Doherty Drug Store."