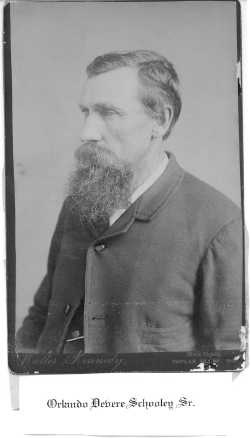 Orlando Devere Schooley was born in Minerva, Stark County, Ohio on 29 March 1838 to William Schooley and Matilda Hollingshead (England) Schooley. The eldest son of this union, he moved with his family to Illinois in 1840 settling in Maysville, (later Clay City), Clay County, Illinois. They traveled from Ohio to Illinois via flat-bottomed boat on the Ohio River landing at Shawneetown. The family drove through to Clay County, stopping at Maysville, on the "Vincennes and St. Louis Stage Route".

Orlando’s father William was a pioneer preacher of the Church of Christ, his name being found in the "History of the Western Reserve of Ohio". While in Illinois he continued his spreading of the Gospel as a "circuit riding" preacher, riding on horseback from Saturday evening until Monday morning and conducting religious services for all who sought them. He founded several churches in southern Illinois, including the first in Clay County.

The family remained in Maysville, IL. for several years until poor health forced William and Matilda to sell out and move with their family to Fulton County, IL. After a few years there they moved to Schuyler County, IL where William repaired overshot grinding mills. Later, they relocated again, this time to Pleasant View, IL. In 1851, when Orlando was age 13, the family had to take back the land previously sold in Maysville, so they relocated for a final time to Clay County. Because of the parent’s emphasis on the importance of academics, Orlando received a robust and complete education. After finishing his own education and training, he became a school teacher in the pioneer school of Clay County, later serving as a director of the school. 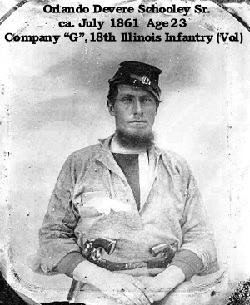 When the civil unrest between the states arose, Orlando was enlisted into Company "G", 18th Infantry by Captain Cooper on 11 May 1861 for a period of three years. The regiment was mustered into State service on 19 May 1861 for thirty days by Ulysses S. Grant, then State Mustering Officer, and into U.S. service on 28 May 1861. He was a volunteer in supporting the State of Illinois and the U.S. Federal Government. Assigned to Company "G", 18th Illinois Infantry (Volunteers) commanded by Captain Daniel Haynes,he became a Private in this Company, a position he held throughout his Civil War service.

The 18th Infantry, organized at Aurora, Illinois, was quickly involved in major battle actions in Missouri and Tennessee. During the week of 2-8 February 1862, his regiment was engaged in operations against Fort Henry, Tennessee. Then, from 12-16 February, it participated in the investment and capture of Fort Donelson, TN. In this engagement, on 15 February 1862, Private Schooley was wounded in the left shoulder, with a rifle ball passing through his scapula and exiting out his back below the right shoulder. Captured by Confederate troops, he was taken to Nashville, TN. as a prisoner. He was later returned to Union forces and taken to the City General Hospital in St. Louis, MO. where he was treated, recuperated, and given a furlough. After medical evaluation of his injuries, it was determined his wounds disabled him from further service and he was discharged on 9 August 1862 at St. Louis, Missouri. When Orlando D. Schooley was released from military duties with the the "Army of the United States", he was given a "Certificate of Disability for Discharge" which contains insightful information about his service, his physical stature and occupation. It reads: Private Orlando D. Schooley of Captain Daniel Haynes Company [G], of the Eighteenth Infantry Regiment of United States Illinois Volunteers was enlisted by Captain Cooper, of the same Regiment at Fairfield, Illinois on the Eleventh day of May 1861, to serve three years; he was born in Carroll Co in the State of Ohio, is twenty three years of age, Five feet 9 inches high, Fair complexion, Grey eyes, Light hair, and by occupation when enlisted a School Teacher. During the last two months soldier has been unfit for duty 60 days.

I certify, that I have carefully examined the said Orlando D. Schooley of Captain Haynes Company, and find him incapable of performing duties of a soldier because of "gunshot wound, the ball entering spine of left scapula and passing out at back of right shoulder touching the spinous process of 2nd dorsal vertebra limiting the motion of the upper scapula". signed Dr. T. Hodgen, Surgeon of the City General Hospital, St. Louis, Mo 8 August 1862. 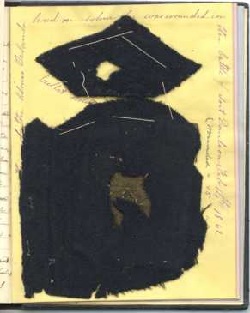 Midway up the left side of the scanned image and continuing in an inverted "u" around the page is his handwritten note. It says: "Piece of the blouse Orlando had on when he was wounded in the battle of Fort Donelson Feb 14th 1862."

Directly below Donelson Feb 14th 1862, an entry in another color of ink says "Wounded "15", which I understand to mean he was wounded on 15 February 1862. Between the two pieces, on the left side and partially hidden, are the words "bullet holes."

After his discharge Orlando Schooley continued to stay active with Civil War veterans by being a sustaining member of the Clay City (Illinois) Chapter of the Grand Army of the Republic (G.A.R.) and participating in their local and national activities. Upon his return from military service he continued his vocation of school teacher, but also became a furniture maker and fine finish carpenter. He was active in community affairs as he served multiple terms as a Trustee for the Clay City town government as well as serving as the Town Clerk. On 15 March 1863 he and Emily Jane Kennedy were united in marriage at Clay City, Illinois. His father, Elder William Schooley, Minister of the Gospel, performed the wedding ceremony. Emily, a native of Newtownards, County Down Ireland, came to Clay County in 1860 with her parents, David Woods Kennedy and Mary (Coulter) Kennedy, and five brothers. Emily and Orlando had nine children only three of whom lived to adulthood: Delia Lorena (married Frederick W. Brissenden), Orlando Devere Schooley Jr. (married Florence Ada Patton) and Emily Agnes (married Clyde Earl Ausbrook). In 1871 he was a charter member of the Clay City Christian Church and a deacon until 1877, when he became an ordained elder in which capacity he served until his death. Orlando died of military service-related injuries at his Clay City home on 28 January 1906, while Emily passed away at the home of her youngest daughter Emily Agnes (Schooley) Ausbrook in Noble, Illinois on 21 January 1914. Both are buried at the former I.O.O.F. Cemetery, now known as the Clay City Cemetery, Clay City, Illinois. The G.A.R. participated in Orlando’s burial service by providing their military tribute to their comrade in arms.