Clay county was organized December 23, 1824. This county was made by taking parts of Wayne, Fayette, and Crawford as then existed. It lies directly west of Lawrence county. Its seat of justice was established at Maysville at the time the county was organized. It was a mile south of the present town of Clay City. It remained the seat of justice till 1842 when the county seat was moved to Louisville which is almost exactly in the center of the county. Old Maysville was on the trail from St. Louis to Vincennes. This road was evidently the one taken by Clark in 1779. It was made a mail route in 1805. The road from Vandalia to Mt. Carmel crossed this old Vincennes trail at Maysville.

The first settlements were made by a Mr. McCauley in 1809 at the village of Maysville. He was driven out and returned to Kentucky during the Indian wars of 1811 to 1815. He returned in 1818 or 1819. By this time others had come, among them a Mr. Elliott, Wm. Ingraham and others. James Levett settled Levett's Prairie about 1825. The Indians were removed from Clay county in 1828. A large Indian village stood at the forks of Muddy, and the burial grounds can yet be traced. Settlements were made at Zenia, Louisville, and in the southern part in the years from 1830 to 1835. Among the early names were Ditter, McKinney, Campbell, Heaton, McKnight, Cruins, and Maxwell. One William Lewis had a pack of twenty to thirty hounds and drove out the wolves and panthers of which there were large numbers. M. C. Mines settled in the forks of Muddy and Laws creeks and practiced medicine among the people.

Wesley Wood built a saw mill and grist mill combined at the point where Wetweather creek flows into Muddy creek. This point is about eleven miles due east of Louisville. In 1842 Jacob Shadle, a blacksmith and gunsmith, settled in the present Pixley township. He was for a long time the only smith in the county.

The settlers came in large numbers after 1840. Settlements grew and in 1842 Louisville became the county seat. Wm. Brooks, a man of means, came to the county in 1842 and settled on Levett's Prairie and was a money lender, and may be said to have been the first banker in Clay county.

From 1840 to 1850 the people were busy opening farms and building homes. There were two stores in the county - one at Maysville and one at Louisville. The staples were coffee and powder. Peddlers passed through the county trading simple manufactures for country produce, including linen which the good women spun and wove from flax the farmers had raised. The peddlers would take this produce to St. Louis, sell out and return with another supply of needful things for the farmer's wife.

The prairies and even the woodlands produced an abundance of prairie grass. This was put up as hay, and of course pastured in the summer time. The prairie fires are said to have been very destructive.

The matter of procuring flour and meal was often embarrassing to the early settlers. The "wet weather" mills were unable to run in dry weather and then farmers had to go to the Big Wabash for their grinding. To remedy this defect in social organization, horse mills were built here and there.

The first railroad in the county was the Ohio and Mississippi which was built through the county between 1850 and 1854. Three stirring little cities have grown up on this road in Clay county - Clay City, which is one mile north of Maysville, Flora, some seven miles west of Clay City, and Zenia, in the southwest corner of the county. This road stimulated business in the towns and the agricultural interests as well. Orman Pixley began a business venture where Ingraham postoffice is now; his business thrived from the beginning. He received and forwarded the mail and distributed the same when it was brought from Louisville or Olney.

On the first Sunday in September, 1839, the Christian church was organized at the forks of Muddy, now the Christian church of Ingraham. The charter members were William and Mary Ingraham; William and Patsy Read; Eli and Jane Read; John and Sarah Rogers; John and Susan Jones, and others. The preaching was done by Elders Ingraham, Read, Ballard, Schooley, Turner, Meeks, etc. The church was later moved to Ingraham, and it is said by the historian of Clay county, Mr. Jacob Shadle, that from the Sunday of its organization to 1876 the congregation never missed a meeting on the Lord's day.

The Methodists organized a church at the home of Benjamin Ulm on the Two Mile Prairie in 1843. The names connected with this church are Ulm, Lough, Joy, Dewhurst and others.

The Baptist organized a church at the home of Jacob Toliver on Union Prairie in 1843. Two preachers by the name of Elkins and Blair were instrumental in building up the Baptist congregation.

This sketch has been taken from a manuscript history of the "Eastern Half of Clay County," written by Jacob Shadle in 1876. He settled in Clay county in 1842 and was the blacksmith mentioned above.

The western half of the county had many things in common with the eastern half. Thomas Elliott settled near Flora in 1818. In 1822 he built a brick house, the first in the county, probably. Here he kept tavern on the old Vincennes-St. Louis road. Schools were opened about 1840 in the vicinity of the present site of Flora. The old settlers would make one believe that all kinds of wild animals infested Clay county.

About the year 1820 George Goble came from Indiana and settled not far from the present site of Louisville. At one time he ran a grist mill on the Little Wabash. The Lewis' family came to the vicinity of Louisville about 1830. Several families gathered about the Little Wabash in the vicinity of Louisville and flat-boating came to be a thriving business. These were built and sold at so much per running foot. They were from sixty to seventy-five feet long and from twelve to eighteen feet wide. They were used to transport farm products to New Orleans. 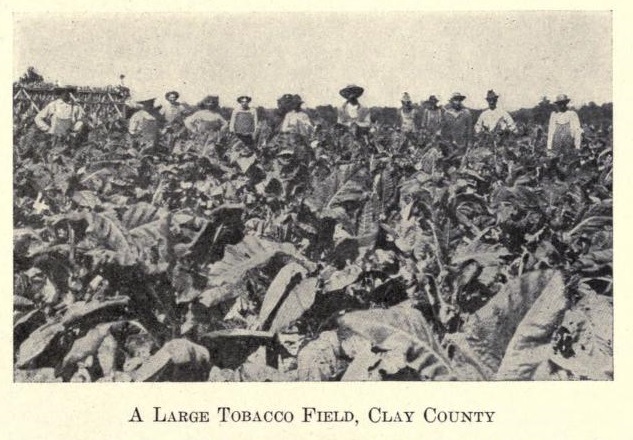 The county is well supplied with villages and towns. Naming them in the order of size they are Flora, Clay City, Zenia, Louisville, Sailor Springs. In the census of 1910 cities are towns of over 2,500, and so these are called towns and villages. In addition to the above there are the small villages of lola, Bible Grove, Ingraham, and Oskaloosa. Flora is quite a railroad center, being the crossing of the B. and O. S. W. and a branch of the same running from Shawneetown to Springfield.

The natural resources of the county are somewhat varied. Excellent timber has been found in this county. Building stone, both sandstone and limestone are found in limited quantities. Some lime is burned in the county. Pottery clay in small quantities is found near Flora. The coal report for 1910 does not show any coal mines in the county. The soil is light and not considered adapted to farming on a large scale. All the grains are raised and the forage foods are sufficient for the stock raised. Clay county is noted for its apples. Some years ago great quantities were shipped out of this county, but in recent years there have been seasons of utter failure.

An interesting story is one told of Sailor Springs. This village of a few hundred people is five and a half miles north of Clay City. In an early day there was found at this place a number of springs with very peculiar water. This water was thought to be the cause of "milk-sick" and so the stock was fenced from the springs. In 1869 Mrs. Thomas M. Sailor of Ohio bought the land - four hundred acres - containing the springs. Mr. Sailor had the water tested and found it contained health-giving properties. Illuminating gas has been gathered from the springs and it has been thought it could be made of real value about the hotels. Back in the 70's and 80's the springs were liberally patronized as a summer resort. Two big hotels with fifty rooms each were often crowded while scores and perhaps hundreds lived in tents upon the beautiful grounds. In recent years the reputation of the springs has somewhat declined and the place is not so popular.

There are ten banks in the county - two in Flora and two in Louisville. The other six are in the smaller towns.