During a period of ten months, beginning October 1, 1929, to August 31, 1930, the Clay County Advocate printed as a special feature, pictures and biographical sketches of business men of Clay City. It was planned at the beginning that after the completion of this series, the pictures and biographies would be reproduced in book form as a means of preservation.

In addition this little book contains reproductions of the obituaries published in the Advocate from October 1, 1929, to October 1, 1930, also a brief history of Maysville and Clay City, in the early days and a list of the various other businesses in Clay City on November 1, 1930, who were not featured in the picture pages of the Advocate.

Clay county was created by an act of the legislature, December 23, 1824.

James Bird, Israel Jennings and John H. Morris were appointed commissioners to locate the county seat, and were requested to meet at the home of John McCawley.

The courts were to meet at the house of John McCawley.

An election was held at McCawley's on the third Monday in February, 1924, and elected a sheriff, coroner and three county commissioners.

On Tuesday, the 8th day of March, 1825, at the house of John McCawley, assembled the first county commissioners' court for the new county of Clay. They were John H. Lacy, Wm. Lewis and Samuel G. Weatherspoon.

Wm. C. Osborn, appointed county clerk by the commissioners, and the first paper put in the court's records was his commission as clerk, bearing the date of February 23, 1825.

The appointment of Mathias Meisenheimer, the first road supervisor for the road leading from John McCawley's bridge to the Marion county line, and John McCawley, supervisor of the Vincennes and St. Louis road, completed the first day's work in the first court in Clay county.

In the second day's court, Daniel May, William Lewis, John McCawley, James Nelson, Andrew Evans, Thomas Elliott, Mathias Meisenheimer, Isaac Elliott and Thomas Nichols were granted a "tavern license" for the term of one year, each paying a fee of $2.50 and were governed by the following rates:

Daniel May donated 20 acres of land to the county. Daniel McCall who was appointed surveyor, was ordered to lay off and plot the new town on May's donation. May was authorized to build the first court house to be erected on the public square. The little county seat, which had borne the name of Hubbardsville from March, 1825, to June of that year, now was named Maysville, in honor of Daniel May, who donated the ground and built the first court house which with additions built to it is standing today and occupied by D. N. Soules.

The spring term of court in 1841 was the last held at the old county seat, the fall term was held at the new and present county seat, Louisville, in rented rooms, pending the completion of the new court house. 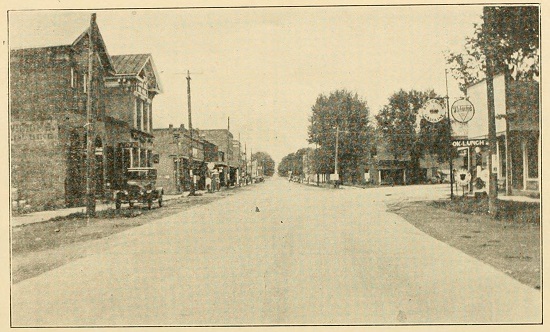 The above picture was taken on a Sunday in July, 1930, from just south of the Y where Route 12 leaves Main street.

On the right: Paden’s restaurant, and next, not showing, Weiler’s Service Station; next, Commercial Telephone office; Coggan building, occupied by Murvin’s general store, showing beyond and above. 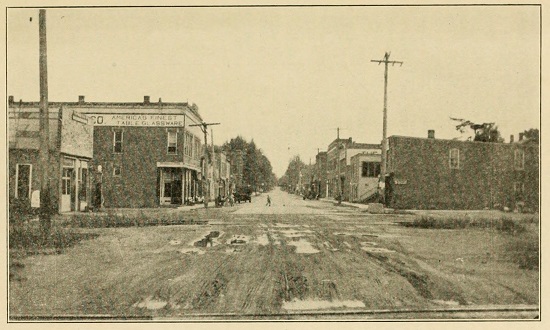 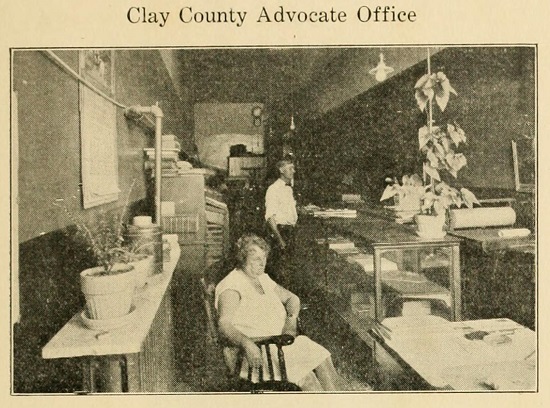 The Advocate office pictured, recalls a Wednesday afternoon as the writer was making ready to go on the press tor the weekly print and Mrs. Carder awaiting to contribute her part in the publication.

The other 19 members of this feature have had someone else to speak for them in this column, but I am having to speak for myself and I will frankly acknowledge, first, that I was born in East Pixley township, Clay county, Illinois, 'way back in 1876, October 1. I was reared on a farm, married in 1897, left the farming to others one year following. Came to Clay City, March, 1900, following painting and paperhanging until 1907, when I engaged in the restaurant with F. M. Brissenden. Sold my interests to Mr. Brissenden in 1917 and after spending three months in Davenport, Iowa, returned to Clay City, engaging in various pursuits of life until January, 1921, when I bought of J. C. Sanders the Advocate equipment which had been lying dormant for 28 months, and in the nine years and six months I have stood every week at the old press and ground out the Advocates, with the exception of one week when I was fortunate enough to be able to take a vacation of ten days in July, 1927.

Mrs. Carder, whose age I had better not mention without her permission, supplies the extra help at the office, especially on press day. Until a few years ago our paper was hand set and until we changed to machine composition she assisted in the composition work. I must not forget to mention that our daughter, Helen, too, is pressed into service on press days — she is 15; I'm not afraid to tell her age.

The Clay County Advocate was established in 1889 by a corporation of Clay City business men one of these, C. D. Duff, still remaining in business in Clay City. Later the business was sold and resold several times, even operation was suspended a number of times.

I want to thank the business men and our patrons for making it possible to re-establish the operation of the Advocate and its tenth year continuance, but I would like to have another vacation before the weather gets too hot. 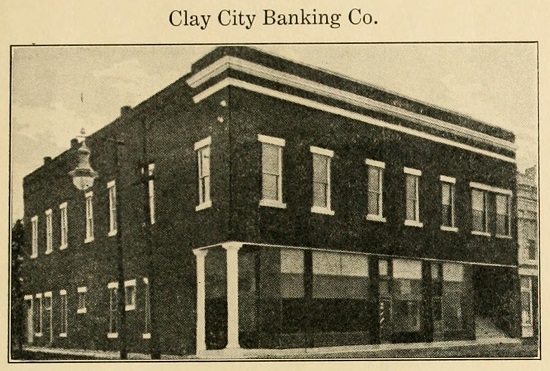 In 1894 a two story brick building was erected nearer the center of the business district which they occupied until the year 1910 when again they moved into their new building pictured above. 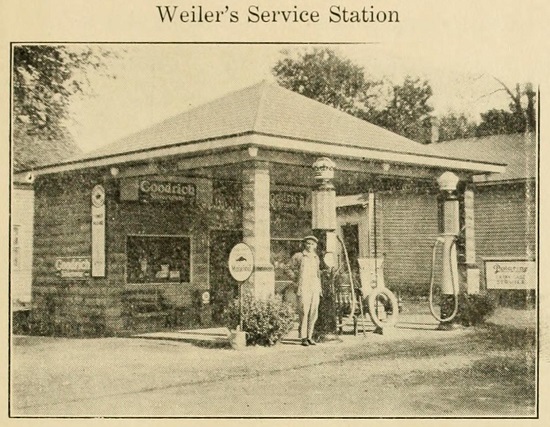 Weiler's Service Station is located at the Y in Clay City, where Route 12 leaves Main street, turning eastward, was built and is owned and operated by Everett Weiler who will be seen standing in the foreground.

Older people will remember this location as the Miller Lumber yard site, years ago.

In the year 1924, after the state had built Route 12 through Clay City, which caused some changes and relocating some of the buildings on this corner, Mr. Weiler planned and was the chief mechanic in erecting the building pictured, for a service station. He has never rested from making it more attractive each year and making his place one of service. It is one of the beauty spots of our little village and Mr. Weiler. it must be said right here, is always found at his post enedavoring to render prompt and adequate service. He has established a reputation of prompt service, square dealing and courtesy with strangers as well as with his most intimate friends.

Mr. Weiler was born in Clay county, about four miles south of Flora, August 9, 1899. Moved with his parents to a farm northeast of Flora, where they resided for a few years then located on what is now known as the Weiler farm, between Clay City and Flora, on Route 12, in 1917. In 1921 he was united in marriage to Miss Ruth Paden, of Clay City. Following his marriage he came to Clay City and entered into the hardware business which he conducted for three years and until he erected the building and engaged in serving the people as he is today.

Besides the Standard Oil pro ducts, Mr. Weiler handles at his station, tires, several items of accessories and has the agensy for the Stewart-Warner radio.

We are featuring this week in somewhat an unusual way, compared with features previously run in that the subject herein featured is a resident of Olney and is the only one represented in this Business Men's Review series of features, outside of resident business men. In a way, since Clay City has no monument works and T. M. Wharf & Son, of Olney, an old established firm having served the people of this community for about fifty years, were eligible to come in and share in these series of features and they gladly accepted the invitation.

The T. M. Wharf Monument Works was established in Olney about fifty years ago. Later, a son, Eugene, who grew up in the business with his father, became a partner, changing the firm name to T. M. Wharf & Son. "Gene," well known by many of our people throughout the community and at the prime of life in age is now leading in handling the business affairs of the business, and speaking rather personally and in plain English, to know him is to like him. (He would have us to deplete this if he knew it was going in, but it's true and we believe in "flowers for the worthy while living.")

"Gene" is a frequent visitor in Clay City; he has rendered service to hosts of people in this community and they are all satisfied customers — if they are not, it certainly is not his fault.

The Wharf Marble Works is located on the west side of the Illinois Central railroad tracks just one-half block north of Main street and we can assure anyone of a cordial welcome to visit Eugene there any time.

Other businesses serving Clay City and its community who are not represented among the biographical sketches, some of whom have recently been added to the list of Clay City's business men, at this date, November 10, 1930, are: