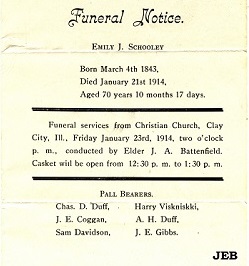 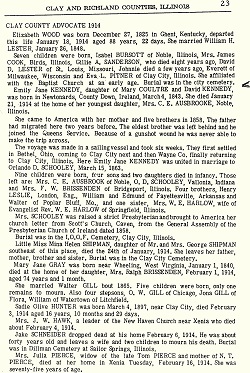 She came to America with her mother and five brothers in 1858. The father had migrated here two years before. The eldest brother was left behind and he joined the Queens Service. Because of a gunshot wound he was never able to make the trip across.

The voyage was made in a sailing vessel and took six weeks. They first settled in Bethel, Ohio, coming to Clay City next and then Wayne Co. finally returning to Clay City, Illinois. Here Emily Jane Kennedy was united in marriage to Orlando D. Schooley, March 15, 1863.

Mrs. Schooley was raised a strict Presbyterian and brought to America her church letter form Scott's Church, Caven, from the General Assembly of the Presbyterian Church of Iredland dated 1858.

Burial was in the I. O. O. F. Cemetery, Clay City, Illinois.